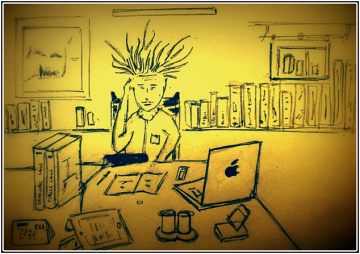 During whole of the first week of Jan 2014, I experienced a ‘gurgled’ feeling inside me, whatever that means. Priorities were getting mixed up between responsibilities of a senior executive in office on one hand and the exam goose bumps of a junior university student on the other. The harmonious cacophony of uninterrupted pre-election fever on TV was not helping the cause. Nerves were getting really nervous and rattled, carrying garbled messages all around the body and the heart trying to soothe them working overtime on the only job it can do-pumping blood, and even more blood.

Talking of blood… Blood was being splattered on Criminal Law VLE discussion forums as well, with tons of murders and manslaughters every day-with intention, without intention, voluntarily, involuntarily, with or without causation…diminished responsibility…huh! In Public Law, Labour party was baying for the blood of the ruling party of Conservatives in Westminster Hall. In Contract Law, I was trying hard but failing to see how a blood bank could be held contractually liable for failing to deliver blood (due to being stuck in traffic jams) to a terminally ill patient. ‘Take a break before you break’ is my mantra (remember my glass-of-water-break in my earlier blog Snakes and Ladders?) Water again… it occurred to me. This time I went parasailing (in reality… not in dreams like last time).

Far from the maddening crowd… 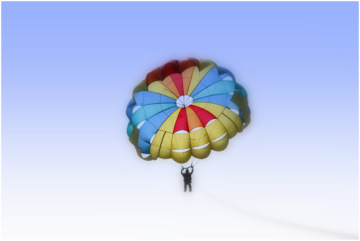 … As I pulled up several hundred feet above the deep blue sea the first bout of fresh oxygen gushed into my lungs. With a deep breath, a feeling of wellness percolated my tired body, permeating through strained nerves, massaging tensed cells and tissues with the alacrity of a seasoned spa therapist. Eyes closed softly, the tranquil solitude of the deep blue sky soaking me in. In yogic glory I glided through long distances seamlessly in the sky without any of the herculean efforts of pillar-to-post-running that I’m used to doing on the ground.

I recalled Rabindranath Tagore …‘The infinite sky is motionless overhead and the restless water is boisterous’. Unable to gaze into infinity, my vision channeled inwards, deep into the boundless universe of my mind, throwing me into an unbundled meditative contemplation of pure joy. I stirred into reality when my parachute clicked, and felt a rush of positive energy gush through my nerve channels, cleansing all pits of negative thoughts along its way.

Rejuvenated, I realized the time had come for my descent, for a fresh innings on the ground but this time with a winner’s mindset, reminded that there is simply nothing to be lost in the journey called life.

They say that when the going gets tough, the tough gets going. Back with a steely resolve, my feet found new ground as I confidently strode into the boardroom and took on my corporate Board meetings with elan a week later. After all, profession has to be nourished first so that it can take turns to feed passion.

February 2014 Back to my LLB drawing board with just about the minimum time left for exam preparations, I’m raring to go at it once more, this time with renewed confidence. The timetable has been revised – 58 chapters in all, first reading done for 20 chapters, 38 to go in two months and a month left for revision. Not bad, eh?

‘Life is about timing’ says Carl Lewis, so for the final lap…on your mark… get… set… go!

KK is studying the Bachelor of Laws (LLB) by distance learning in Kolkata, India. He is in his first year.

This entry was posted on Monday, February 10th, 2014 at 2:54 pm and is filed under LLB. You can follow any responses to this entry through the RSS 2.0 feed. You can skip to the end and leave a response. Pinging is currently not allowed.

One Response to A Journey to the Centre of the Mind