New Student from the Newest Country 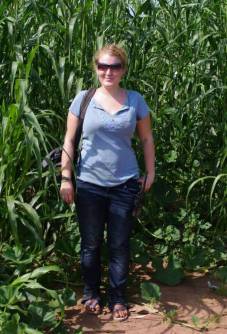 Greetings University of London International Programmes blogosphere. My name is Nadia, I’m 25 years old and I’m a humanitarian aid worker in South Sudan. I’ve just started the distance learning Postgraduate Certificate in Public Health, although I hope to eventually increase this to a Masters if this goes well (fingers crossed!).

I did a BA in Social and Political Sciences and then immediately after an MPhil in African Studies at Cambridge University, leaving in 2011, so I’ve still got the student vibe in me, and I think going back to studying will be less of a struggle than for many of the other students who have had a bigger gap. However I have no health background, so I am a bit daunted when I see so many of my fellow students are medical practitioners already!

I became interested in Public Health from my work. In my two and a half years in South Sudan I’ve worked on a variety of assessments for NGOs and UN agencies, and since January I’ve been based in Yida and Ajuong Thok refugee camps, where about 75,000 refugees from the Nuba Mountains have come since 2012, fleeing aerial bombardment of their homelands by the Sudanese government to quell an armed rebellion. 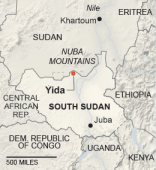 I have been working doing various assessments of the camps, but in particular working with GIS to help NGOs on the ground – for example doing a census of all the households and linking this to a GPS coordinate so we can see how many refugees live within a particular distance of a borehole, and in which areas of the camp people have to walk unacceptably long distances to reach water. As water and sanitation was the greatest challenge in Yida this year and increased by a Hepatitis E epidemic, I worked very closely with water and sanitation experts and became extremely interested in this field and the effects on human health. I feel I applied to the course on a whim and then actually decided to go through with it as I realised it was something I was very keen to do.

Several months down the line and I am not regretting it at all, as I’ve found my course materials very interesting. My biggest challenge has been that due to the lack of any reliable postal options to South Sudan, I decided to let my course materials be posted to relatives in the UK, so I have start with only what’s available online and wait to receive the physical copies until December. The online resources are great however, and I’m able to start my studies despite this drawback. I am also really enjoying the forums, as it makes you feel connected to a student body even though I am in fact in a refugee camp in the middle of nowhere.

Studying in these conditions is however hard, along with the obvious health problems that plague everyone here – I have not studied for a week due to my seventh episode of malaria since I came to South Sudan. However I am lucky in that the humanitarian workframe means it is quite easy to take a couple of months off, as contracts are often for a six month period only, and people understand the need for rest and recuperation. So in one month I will be taking two months off to live in Cairo, study, enjoy not living in a tent, eat a lot of food that is not goat stew, beans and rice (our staple diet), and hopefully feel well prepared to start thinking about my assignments.

In the meantime, I’m going to try and read another chapter of Environment, Health and Sustainable Development and then go fish the giant millipedes out of my tent and go to sleep  🙂

Nadia is studying the Postgraduate Certificate in Public Health by distance learning. She is originally from the UK but currently lives in South Sudan.

This entry was posted on Monday, October 28th, 2013 at 12:16 pm and is filed under Courses directed by LSHTM, Public Health. You can follow any responses to this entry through the RSS 2.0 feed. You can skip to the end and leave a response. Pinging is currently not allowed.

11 Responses to New Student from the Newest Country