Hailed as the most successful model of regional integration, 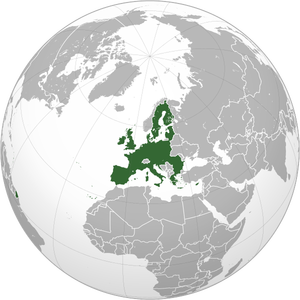 the EU’s unity is challenged on economic, political, and – perhaps most importantly – social grounds. Thriving extremist parties, uncoordinated responses to migration, barbed-wire-fenced frontiers, Schengen Agreement suspension, day-to-day “misunderstandings” between member states, and a pivotal referendum to be held in the UK next June threaten the Union’s stability as well as its so often praised common fundamental values. In short, a region crumbling under the weight of potentially irreconcilable differences between members. Strikingly, all of this ignores recent fights over the Euro, which would make things even worse.

Although I support the Union and hope political integration will consolidate, I feel ashamed as a European because, from an outside perspective, we do look pathetic. For instance, some member states believe that a couple of centuries of cruel murderous colonialism and atrocities committed in almost every continent can be wiped out overnight by building walls, closing their frontiers, or even bringing immigrants back to their countries.

Europe’s heterogeneity is immediately clear from an historical perspective; its contradictions and peculiarities derive from multiple clashes of civilisations treading on Eurasian soil and occupying the Mediterranean Basin since prehistory. Regretfully, today, those differences are also sources of weakness. In turn, this frailty engenders political ineffectiveness, distrust, and division. Yet, as Antonio Gramsci reminds me, we should have pessimism of the intellect and optimism of the will.

Although I primarily write on this Blog to talk about economics (and I have very much enjoyed doing it so far), in order to address the above-mentioned issues and try to make sense of the present, one cannot but dwell on the realm of international relations (IR) and history. This justifies the following brief aside.

I’m aware IR contemplates different but overlapping theories, as most of the social sciences do. Therefore, a proper understanding of our complex contemporary world should draw from multiple approaches to avoid being swallowed up by current events and falling into the trap of believing that, as a theory successfully explains the present, it has general validity.

Of course, such premises and warnings about the danger of reducing the richness of the literature to predefined labels doesn’t prevent me from saying that I sympathise with neorealist ideas and follow these throughout my post. This is not to say neorealism is the best line of argument nor is it to discard other valid theses. It’s mainly because of my appreciation for Kenneth Waltz – whose work was substantially influenced by microeconomic theory! – and Noam Chomsky.

The main reason I find neorealism, or structural realism (see why in a moment) rather more appealing than classical realism is that it relaxes some of the uncomfortable, although not necessarily false, classical assumptions on human nature as the true driver of international relations. In particular, by moving away from classical views of innate human desire to dominate others, it posits a fundamentally anarchic and decentralised international system where states play or balance against each other according to their relative power and interests. Hence, a peculiar structure influences agents’ (i.e. states) behaviour, rather than an intrinsically offensive human nature. In addition, being prone to game theoretic investigation, the security dilemma is another central concept of structural defensive realism that captivates my interest.

You may now ask what the point of such an aside is and how it relates to the post’s title. Well, neorealism has a few things to say about regionalism and, particularly, the EU.

As an example, from a neorealist perspective, regional groupings form in response to external challenges in much the same way as states form alliances to balance power or threats. Thus, in this respect, the geopolitical context of the European integration plays a crucial role.

Indeed, if Europe was able to shift from war and competition to regional cooperation and integration after the Second World War (WW2), it owes that to a set of geopolitical circumstances well identified by Andrew Hurrell:

The erosion and then collapse of the colonial empires on which the power of Britain and France had been built; the immense physical destruction and psychological exhaustion of the thirty-year European civil war; the perception of a burgeoning threat from the Soviet Union; the long-predicted transformation in the scale of power and the emergence of a new class of superpowers […]; and the powerful pressure from the USA to move towards greater regional co-operation.

In fact, the US played a critical role in pressing for an integrated Europe. First, the Organisation for European Economic Co-operation (OEEC) came into existence as a condition attached to the Marshall Plan. Second, the US pushed for the rearmament of West Germany, which somehow forced Europeans to live together with a rehabilitated major power (“regionalist entrapment”; integration serves as an institutional construct to manage a powerful state). Third, European integration developed at a high price: security dependence on the transatlantic partner. A price that Europeans still pay today, no matter how valuable the goods in question are.

In the 1960s de Gaulle placed great weight on European co-operation […] as a means of countering le défi americain […]. Equally, the relaunch of European integration in the 1980s can be interpreted as a response au défi japonais.

In a sense, today we could argue about le défi chinois. Thus, balance-of-power concerns partly fuelled regional integration; in other words, or rather economic terms, gains and losses.

However, as previously anticipated, no theory can explain everything. Notwithstanding the fact that neorealism is quite convincing at explaining how power shifts happen and how regional groupings form, it is probably less influential when it comes to regional cooperation once integration is under way.

Indeed, alternative views like neoliberal institutionalism or constructivism profoundly contribute to understanding regionalism. Actually, constructivists pay close attention to concepts like “regional awareness” and identity among members of a regional grouping, whose cohesion ultimately depends on a prolonged and strong sense of community, rather than short-term interests. Constructivism is very telling with respect to integration dynamics, due to its sociological approach.

The fiercest attack to neorealism comes from the liberals’ tenet that democracies don’t go to war with each other. As a matter of fact, there is evidence of a “democratic peace” in Europe and, more generally, between democracies since the end of WW2. I largely agree with that. Nevertheless, we should consider that such evidence builds on a very short time span and sometimes costly compromises. After all, WW2 is an extremely recent event when compared to the entire turbulent history of humanity; if we really want to prove our peaceful and respectful nature, we still have a great deal to do! I’m highly sceptical we’ll ever do that and I believe democracies often don’t go to war with each other for the very simple reason that wars are kept at a safe distance or, even worse, purposely created to destabilise other regions threatening their hegemonic power. Whoever has ears to hear, let them hear…

Plus, does this mean non-military conflicts cannot arise any more within the EU? Given the existing crisis and general difficulties at each round of enlargement, the answer tends to be negative. Then, what about the contentious link between the institution member states created by foregoing part of their sovereignty and questions of representativeness, accountability, and legitimacy of those institutions (see recent disputes over the Greek debt crisis)?

Our discussion so far rests on realist historical considerations and hopefully provides some insights on how to interpret current matters. We generally need to contextualise particular situations by relying on diachronic analyses as opposed to short-sighted synchronised ones, largely preferred by political leaders. Of course, the nature of a blog post imposes some restrictions both in length and in scope; as a consequence, I’ll draw some conclusions in light of what I’ve exposed and my personal experience as a European citizen.

National interests still dominate over common fundamental values underpinning the European Project like respect for human dignity and human rights (including the rights of minorities!), equality, justice, non-discrimination, pluralism, solidarity, and tolerance. Instead, populist and extremist parties now hold leverage with a wide array of opposite “values” to divide and encourage hatred. This is detrimental not only to the attacked foreigner but also to the European citizen and to the idea of a united Europe. On top of that, we lack, on so many grounds, that we cannot but look sceptically at those who prefigure a fully-fledged political unity by exclusively focusing on monetary aspects. In fact, as far as these aspects are concerned, the EU is trapped in a fragile incomplete monetary union (i.e. where each member state maintains its own independent budgetary policy) whereas a full fiscal union is likely to be required in the long run; and we cannot have a full fiscal union if there’s no political willingness to do that!

Finally, and to me more importantly than any single aspect outlined so far, the EU lacks what constructivists call “regional awareness”, that shared identity we talked about just a moment ago, that shared sense of belonging to the same particular community for better or for worse. Be careful not to confuse this with standardisation and homogenisation of culture, habits, language, … ! Nothing could be sadder than that and I’m not envisaging such a prospect. Heterogeneity is precisely what enriches this piece of land. I’m rather talking about the willingness to go beyond those negotiable differences and accommodate pluralism while conserving fraternity. There’s no such thing as a European Country, yet.

This leads to the end of our discussion. But, if you like, I would conclude by quoting from a 2011 thought-provoking paper on the state of the EU:

Just as the emergence of the Soviet Union as the only great power on the continent pushed the Europeans to make the EC, its collapse removed the incentive for integration. Suddenly, they did not have to think about establishing a political or military community. Nor was there a compelling geopolitical reason for them to maintain the economic community they had built during the Cold War. […] Provided there are no further shifts in the distribution of power and the economic situation does not pick up – both fairly safe bets – the slow fraying of the Community that has been going on for a decade now will probably continue. This is not to say that the Europeans will stop cooperating with one another. After all, there are plenty of reasons for them to continue working together. The current distribution of power, however, means that it is unlikely the EC will continue to survive in its current form. As time passes, it is likely to look more like other international institutions, and less like the exceptional case that it seemed to be for so long.

Were we to embrace the proposition that the EU’s integration process strengthens whenever facing common threats, will this time of crisis rekindle further consolidation? Will we be able to gaze beyond the finger and look at the moon? Unfortunately, history keeps being blatantly ignored, whether purposely or foolishly.

Oscar is studying for the BSc Economics and Finance independently in Italy.