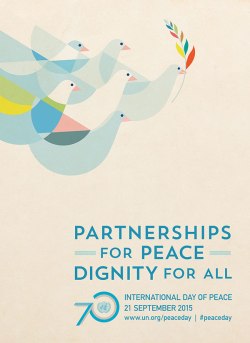 “I call on all warring parties to lay down their weapons and observe a global ceasefire. To them I say: stop the killings and the destruction, and create space for lasting peace.”

Today, 21st September, is the International Day of Peace, ‘a day devoted to strengthening the ideals of peace, both within and among all nations and peoples,’ declared by the General Assembly of the UN. This year, as the day approached, I began to think more deeply about the idea of peace, how we conceptualise it, and how it applies to the real world. What is peace? It is often used to imply an absence of war, but is that a sufficiently comprehensive definition?

The idea of peace is, unfortunately, inextricably bound with the idea of violence, and to understand peace we need to be able to identify violence. Johan Galtung, co-founder of the Peace Research Institute Oslo and often regarded as the pioneer of peace studies, wrote a paper in 1969 which reflected on notions of peace, and violence. He concluded that using only a narrow definition of violence, one based only upon physical harm, meant that ‘highly unacceptable social orders would still be compatible with peace’.

Instead, Galtung regards violence as a state in which a human being is influenced in such a way that causes their actual bodily and mental existence to fall short of their potential realisations. Ultimately, he argues that ‘in a society where life expectancy is twice as high in the upper as in the lower classes, violence is exercised even if there are no concrete actors one can point to directly attacking others, as when one person kills another.’

The theme of this year’s International Day of Peace is ‘Partnerships for Peace – Dignity for All’, which ‘aims to highlight the importance of all segments of society to work together to strive for peace’, and focusing on the way in which governments, civil society, the private sector, faith-based groups, and other non-governmental organisations (NGOs) are fundamental to supporting the work of the UN. 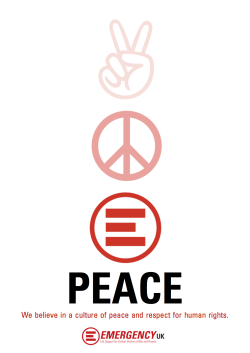 In addition to studying an International Relations BSc through UOLIP, I also work for a charity based in London; EMERGENCY UK is an arm of the Italian NGO EMERGENCY, which provides free, high quality medical and surgical treatment to the victims of war, landmines, and poverty. Working for EMERGENCY UK is actually incredibly helpful to my studies – it helps me contextualise the sometimes abstract ideas found in International Relations into a concrete reality, and provides real world examples. This is especially true with the notion of peace, as EMERGENCY actively promotes a culture of peace, solidarity, and respect for human rights.

Peace in practice The most obvious way in which EMERGENCY’s culture of peace manifests itself is the fact that many EMERGENCY facilities are surgical centres for victims of war, such as the surgical centres across Afghanistan, Iraq, or previously in countries such as Rwanda, or Libya. But the culture of peace is pervasive, and present in subtler ways too. Despite operating in many active war zones, all EMERGENCY facilities are weapons-free areas – not even the hospital security guards carry guns. 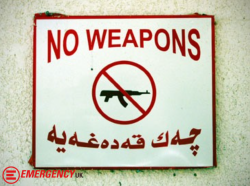 But EMERGENCY’s programmes also tackle issues which deal with more passive, structural notions of violence, such as gender-based social inequality. In 2003, EMERGENCY opened its Maternity centre in Anabah, Afghanistan – the first and only specialised and free-of-charge centre in the entire country. Within months of opening, the centre was having a significant impact upon the local community. Marja Abdul, the coordinator of the national midwifery team at the centre, described it as an ‘…extraordinary success in a country where, until just a few years ago women were not allowed to go to the hospital, not even in life-threatening situations.’ But not only does the centre provide surgical and medical treatment, but also opportunities for training, employment, and empowerment for local women.

EMERGENCY has also been strongly involved in the response to the influx of asylum seekers, refugees, and migrants landing ashore on the southern coast of Italy, following perilous journeys across the Mediterranean Sea. When asked how she found the strength to make the journey, one woman who came ashore told our staff that

‘I didn’t have a choice. I couldn’t let my sons be made into child soldiers, I couldn’t let my daughters have no future. When I left people thought I was mad, and I was never certain that we would arrive safely. But it’s the dream of their future that led me.’

Another man who came ashore told us of the horrors he had faced throughout his journey, and ended with ‘I would not want anyone to have the same experience that I did’.

Working to help people such as these is an important part of EMERGENCY’s work – but it is not all of it. In addition to these active programmes, it is important that we share the stories of those we help, and to highlight obstacles to peace. Most recently, this has taken the form of of opposing the Defence and Security Exhibition International (DSEI) arms fair held in London last week, and showing solidarity with refugees at a national demonstration.

Promoting a culture of peace, solidarity, and respect for human rights, sometimes means highlighting the roots of violence across the world. Understanding violence, how it manifests itself, and what causes it is key to understanding peace. Those who are for peace must speak out against any government, system, or structure which perpetuates violence in all forms, and against all peoples; a commitment to peace must be comprehensive.

As EMERGENCY’s founder, Gino Strada, said when reflecting upon the current refugee crisis,

‘If any one of us, any human being, is suffering right now, because of sickness or hunger, it’s something that concerns all of us. It has to concern all of us because turning our heads away from the suffering of a human being is always an act of violence; a most cowardly act of violence’.

Working for EMERGENCY UK has made me appreciate that peace is more than just the end of wars. Because ultimately, wars don’t end when they’re declared over. 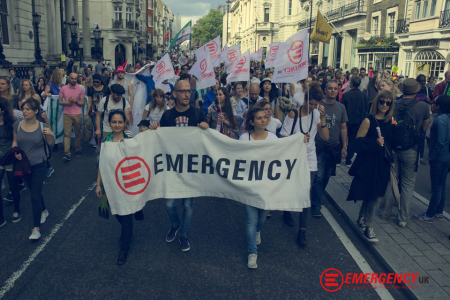 This entry was posted on Monday, September 21st, 2015 at 11:21 am and is filed under Courses directed by LSE, International Relations. You can follow any responses to this entry through the RSS 2.0 feed. You can skip to the end and leave a response. Pinging is currently not allowed.

One Response to What Is Peace?