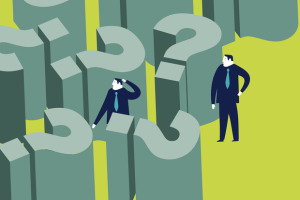 By now, many of us have completed our 2015 University of London (UoL) exams. We’re hoping for good results. But that’s only because there’s a sense in which we don’t know how well we performed. That is, we have doubts about how well we performed. In this case, our doubts are in a sense forced upon us by the nature of our situation. For we desire good grades, we’ve completed our exam essays, and there are criteria that our essays must satisfy to earn good grades. But we have insufficient information to determine precisely what criteria our completed exam essays in fact satisfy. Thus, we’re left with our doubts and our hopes (at least until July!).

In the study of philosophy, however, doubt is not generally forced upon us by the circumstances we find ourselves in. Rather, it is carefully cultivated by critical reflection on what most of us would describe as very ordinary situations. And it’s cultivated with a specific aims in mind. For carefully cultivated doubt can lead to insights about the nature, and perhaps even the content, of knowledge itself.

So it seems as if claims about the contents of our current experiences are among (though they may not exhaust) the claims we’re most confident about. But let’s take a small first step in the direction of philosophical doubt: Isn’t it at least possible that you’re not reading this article right now? For perhaps you’re merely dreaming that you’re reading it, which means you are in fact lying in bed with your eyes closed, and are sound asleep. If you’ve had at least one vivid dream in the past, you would probably concede that it’s minimally possible that you’re dreaming right now. But even if you haven’t – indeed, even if you can’t recall having had a dream in your entire life – you’d have to concede that the concept of a dream, even of a dream that’s as experientially vivid and integrated as any possible waking experience, is a coherent one. And if that’s the case, then you can make sense of the claim that your current experiences may be of the sort that properly fall under the concept ‘dream’, and thus may be giving rise to the false belief that you’re now reading an article on the UoL Student Blog!

But isn’t there a way to determine whether you’re now dreaming? You can’t do so by appealing to any of the general features of your experience itself, at least if we suppose you’ve just granted that a dreaming experience can, in principle, be as experientially vivid and integrated as any waking experience. (If you didn’t grant this premise, why not?) Perhaps you can devise some test to determine the difference between waking experiences and dreaming experiences. For instance, you might pinch yourself to see if you’re asleep. But that won’t do, for you could surely dream that you’ve pinched yourself. Or you may claim that while you can’t presently tell whether you’re dreaming, you’ll know whether you are shortly enough. For either you’ll wake up or you won’t; and if you wake up, it follows that you were dreaming. But couldn’t you dream that you’ve just awoken from a dream? We can generalize the problem we seem to be up against in the following way: for any dream test you can devise, it seems perfectly intelligible to suppose you’ve just dreamed that you both applied it and passed it! But then you have no way of telling whether you’re actually reading this article right now or are merely dreaming that you’re reading it.

We’ve now established our philosophical problem. But the point of the problem isn’t to marvel at the fact that you might be dreaming right now. Rather, it’s to try to determine how we can reconcile two apparently conflicting claims: (1) we want to say that we do know we’re not dreaming right now; and (2) we cannot seem to explain how we know we’re not dreaming right now. Most philosophical problems can be posed in this way, i.e. by laying out a number of prima facie incompatible claims that seem (again, at least prima facie) equally plausible.

But note that much of the force of the claim that (1) and (2) are inconsistent is derived from a further claim that’s merely been presupposed so far, viz. (3) If someone cannot explain how he knows that a claim is true, he doesn’t really know that the claim is true. For the apparent source of the inconsistency exhibited by the conjunction of (1) and (2) is that you know you’re not dreaming, but cannot say how you know. What, then, are our basic options?

First, we can accept (2) and (3) and reject (1), which amounts to embracing a form of skepticism, at least about any beliefs that are grounded in our present experience. For many of us, though, this option is a last resort, and should only be adopted if we’re compelled to do so by the arguments. And thankfully, we haven’t reached that point quite yet!

So instead we might want accept (1) and (2) but question (3), which is the apparent cause of the inconsistency that troubles us. And there do seem to be good grounds for rejecting (3). For instance, suppose you say, ‘I’m in pain’, and someone asks, ‘but how do you know that you’re in pain?’ It’s perfectly reasonable to respond with ‘Because I can feel pain!’; but that’s just another way of saying, ‘I’m in pain’! So (3) is too strong, for there are some claims that we can know to be true despite the fact that we’re unable to explain how we know them (at least in a way that goes beyond what’s contained in the initial claim itself). We might thus reformulate (3) as: (3’) If someone cannot explain how he knows that a claim is true, then in some cases he doesn’t really know that the claim is true. And for those who want to reject (3) in favor of (3’) the question now is, ‘Is the claim that I’m not now dreaming one of those claims, like the claim that I’m in pain, that I can know to be true without being able to explain how I know it to be true?’ And that’s where your real philosophical work will begin.

But is (this crude formulation of) Malcom’s argument convincing? It seems as if we can distinguish waking consciousness from dreaming consciousness. After all, no one claims that dreaming people are conscious of their surroundings. Rather, the claim is that dreaming people are conscious of their ‘inner’ experiences or representations or imaginings. So this distinction may allow the skeptic to press on with the dream argument in a way that’s unaffected by Malcom’s response to it.

For instance, let’s suppose you’re reading this article on a computer and you say, ‘This is a computer’. Now in the world of waking experience, you’re arguably referring to a spatio-temporal object that exists independently of your experience — an object that plays a crucial role in causing your experience of a computer. But in the world of dreaming experience, the very same phrase, uttered with the very same experiential content in mind, would refer to (say) a mental representation caused by your neurophysiological state, or to the neurophysiological state itself (since that would then constitute its cause). And if, as Putnam argues in his famous Twin Earth thought experiments, the causes of our experiences are in a sense a part of the meaning of the words and sentences we utter when we speak about them, then you may speak truly when you say ‘this is a computer’ both in waking experience and in dreaming experience. For apparently identical sentences used by speakers with apparently identical psychological states can mean something different in each case. Some sentences, we might say, are said in waking-English, and some are said in dreaming-English. And the upshot is, when you say ‘I’m now reading an article on the UoL student blog’, you can speak truly whether you’re dreaming or awake!

Putnam’s argument is powerful, but does it ultimately succeed in refuting the skeptic? Probably not; skepticism is like a bump in a rug: if you successfully push it down in one place, it inevitably pops back up somewhere else. For instance, suppose I learn to use the word ‘computer’ in waking experience, and then go on to use it in the sentence ‘this is a computer’ in a dream – why suppose I’m speaking dream-English and not waking-English? If I’m speaking waking-English, I’ve said something false. So while Putnam’s argument may be effective against skeptical claims that suppose that we’re always dreaming, it cannot easily deal with cases like the one I just described. And those sorts of cases can very effectively raise skeptical concerns.

So where are we now? It seems as if there is a sense in which we must concede that we do not know we’re not dreaming right now. That is, we cannot say we’ve found anything to appeal to that guarantees that we’re not dreaming. But do we know anything in that strict and absolute (i.e. infallible) sense? Perhaps (with Descartes) we can confidently say that we infallibly know that we exist. And perhaps we need to contextualize claims to knowledge insofar as what we’re willing to claim others know seems to depend upon the details of the situation in which they’re considering such things. Or maybe our belief that we’re not dreaming is a basic belief that is justified in the absence of any evidence or inference from other beliefs. Or maybe we need to stop worrying so much about knowledge and focus on the process of justification instead. Or maybe all we mean when we say we ‘know’ something is that it’s true and we came to believe it through processes and faculties that are generally reliable. Or maybe this isn’t even a problem about knowledge at all, but is rather a result of a mistaken understanding of what dreaming is. And there are, of course, many more alternatives.

Thankfully, our aim here isn’t to decide which among them is the best alternative. Rather, I’d simply like you to note how reflecting upon the apparently prosaic question of whether you can know you’re not dreaming right now has led us to a rich and diverse range of views about knowledge, justification, perception and meaning — views that have serious consequences for the more ‘pragmatic’, everyday questions that these areas throw up. The study of philosophy is often like that. You begin by thinking about something that’s apparently simple, perhaps even childish, and end up thoroughly amazed at where careful philosophical reflection can lead you!

This entry was posted on Wednesday, May 20th, 2015 at 4:41 pm and is filed under Philosophy. You can follow any responses to this entry through the RSS 2.0 feed. You can skip to the end and leave a response. Pinging is currently not allowed.