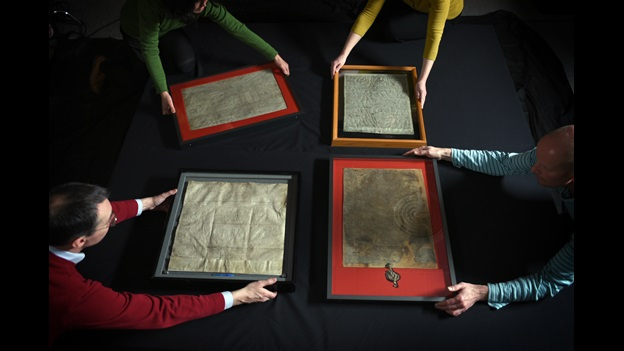 The first story that in fact I (and the rest of the common law world it would seem) am completely obsessed with is the 800th anniversary of King John’s sealing of the Magna Carta at Runnymede June 16 1215. It is prompting an enormous variety of responses from a good deal of pomp and ceremony at governmental levels to Lord Sumption’s reference to “high minded tosh” at his recent address to the Friends of the British Library; but rather like a coronation or the death of a princess its significance goes way beyond its actual remit and enters the very lifeblood of our cultural landscape.

Monday 2 February to Wednesday 4 February 2015 saw the remarkable coming together, at the British Library of the only four surviving original 1215 Magna Cartas and the rather quirky but highly attractive marketing ploy of only allowing 1,215 public visitors (that were selected from some 43,715 applicants from over 20 countries) to said exhibition; which then journeyed via the House of Lords on Thursday 5 February before returning to their respective home institutions (see details below).

But as if that wasn’t enough; we’re getting ready to bury a monarch. 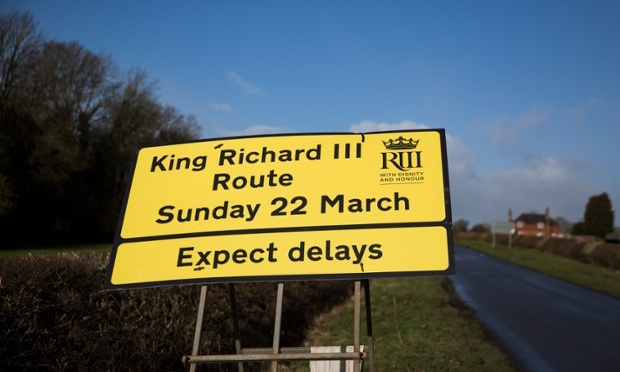 A ceremonial procession around Leicestershire preceded the reinterment at Leicester Cathedral. Photograph

Some 530 years after he was slaughtered at the Battle of Bosworth Field Richard III (2 October 1452 – 22 August 1485) will finally at 10:00 am Thursday 26 March 2015 be laid to rest at Leicester Cathedral; defeated by Henry Tudor his death marked the end of the House of York and as such he was to be the “last English king to die in battle on home soil and the first to do so since Harold II was killed at the Battle of Hastings in 1066”. 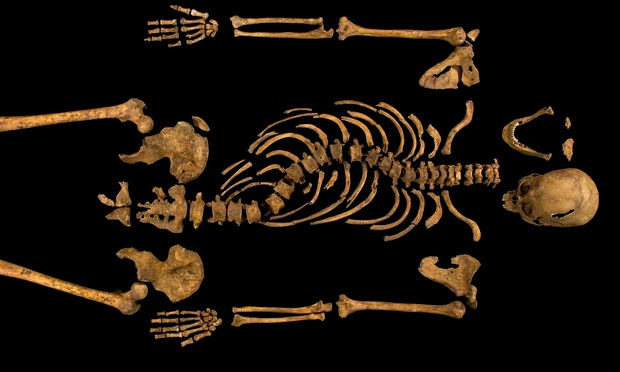 The skeleton of Richard III, who suffered from scoliosis of the spine. The king’s remains will be reburied at Leicester cathedral this week.

Buried without much ado his remains were lost until 2012, when archaeologists excavating the site once occupied by the friary Greyfriars, Leicester using ground penetrating radar located a skeleton; markedly scoliotic and exhibiting horrendous battle related injuries it was finally (after radiocarbon dating and the remarkable comparison of his mitochondrial DNA with that of two matrilineal descendants of Anne of York (Richard III’s eldest sister)) on February 4 2012 confirmed to be that of Richard III; in fact it is one of these descendants, Michael Ibsen, a cabinet maker from London who has hand carved the coffin Richard will be buried in.

For any budding legal historians Richard III is not a name to be taken lightly; as Phillipa Langley (a screenwriter who helped raise the £34,000 for the original dig) pointed out:

“Richard III brought in revolutionary legal principles – the presumption of innocence, the concept of blind justice, the introduction of bail – and insisted that all laws should be translated from Latin or French into English so that his subjects could understand them.”

Establishing the Court of Requests in 1483 (a court to those who could not afford legal representation could apply) he went on to found the College of Arms in 1484, banned restrictions on the printing and sale of books and ordered the translation of all written laws and statutes from the traditional French into English.

Exciting times, but not too exciting I hope; you’ve got another 742 contract cases to learn… happy studies!!!

3 thoughts on ““of cabbages and kings…””