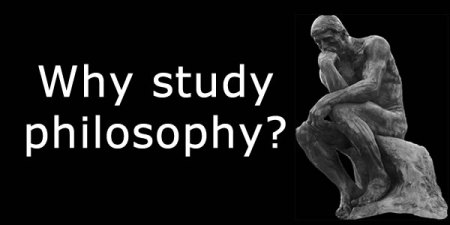 Philosophy students love questions. Most of us were introduced to philosophy through memorable encounters with particularly riveting questions – questions that gripped us as soon as we gripped them. Is there a god? What are rights? Do we have free will? Is any action really right or wrong? Why does anything exist rather than nothing at all?

But there’s one question that most of us don’t find particularly compelling. Unfortunately, it may also be the question that we are, as philosophy students, most frequently asked:

“What can you do with a philosophy degree?”

I’m going to try to answer that question. But first, I’d like to reformulate the question in the following way:

The first response we might give to our question is, all things considered, perhaps the best answer. Why study philosophy? Because it’s fun. When you study philosophy, you engage with the deepest questions that arise, quite naturally, from living a human life. And your companions – indeed, your guides – as you consider these questions are among the most brilliant men and women who have ever lived. Studying philosophy is often characterized as taking part in multi-millennial conversation with the likes of Plato, Aquinas, Hume, Kant, Schopenhauer, Nietzsche and Russell. Not a bad way to spend one’s time!

The second response is that the study of philosophy promotes the attainment of the true end or aim or purpose of what we frequently call ‘getting an education’. And that end is decidedly not ‘getting a job’, or even finding a vocation. But then what is it? We can glimpse the answer by reflecting on the etymology of the word ‘education’. For it’s derived from the Latin term ‘educare’, which means ‘to lead’. An education, then, takes you from one place, and leads you to another. But where?

Once again we can let etymology act as our guide. For we often identity ‘getting an education’ with the study of the ‘liberal arts’. And the phrase ‘liberal arts’ means (when translated from its Latin form, ‘artes liberales’) something like ‘the skills for freedom’. But we can interpret this in two ways. First, we might say that the liberal arts teach politically free people what they need to know to live as citizens in a free society. And this is how the phrase is often understood. But it can also mean something more profound. For it can refer to what one must know to be free in the deepest sense of the term, which is a kind of freedom that one can enjoy even while living under the most oppressive political system. This is the intellectual freedom that you achieve when you learn how to think critically about the deeply rooted assumptions of the culture into which you happen to have been born. And few disciplines develop and promote the skills required for this sort of critical reflection as effectively as the study of philosophy does. Hence, philosophy is an excellent means of achieving the true end of an education, viz. intellectual freedom.

“That’s all well and good,” you might say. “But what about the real world? I agree that the study of philosophy promotes the sort of rarefied freedom you’ve been talking about. But in our day, it’s simply a fact that ‘getting an education’ and ‘getting a job’ are intimately bound up. So how free are you going to feel if you can’t find work because your fancy education failed to provide you with marketable skills?”

That’s certainly a fair question. And it’s premised on an incontrovertible fact: unless you’re independently wealthy, ‘getting an education’ will almost certainly be a major step on the way to ‘getting a job’.

But here the philosophy student can ask the critic a few questions. How much do employers value clear communication skills? Or the ability to understand and synthesize large amounts of complex information? Or highly developed analytical abilities? Or the ability to identify and clarify important questions? For these are precisely the sorts of skills that one develops – and develops to a high degree – while engaging in a serious study of philosophy.

That’s not an empty claim. For the statistics seem to bear it out. Consider the performance of philosophy majors on the Graduate Records Examination (GRE), a standardized test that must be taken by applicants to graduate programs that are located in the United States. Philosophy students not only outperform all others in terms of overall GRE scores. They also come out on the very top in two of the three categories that the GRE tests (the Verbal section and the Analytical Writing section), and outperform all other humanities majors, and even all social science majors except economics students, on the remaining section (the Quantitative section). 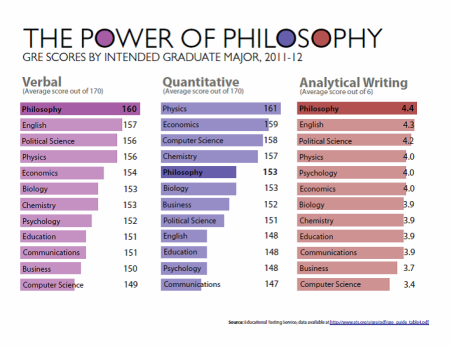 Further, philosophy students are among the highest scorers on the Law School Admissions Test (LSAT) required by U.S. law schools (despite being paired, rather oddly, with ‘religion’ majors in the data. Finally, there’s data that suggests that philosophy majors go on to make a pretty decent living after all, despite all the jokes about thinking deep thoughts while on unemployment .

So, why study philosophy? Because it’s tremendous fun; it promotes the development of the sort of profound intellectual freedom that is the summum bonum of true education; and it develops in its students a set of skills that are highly marketable in a dynamic, information-driven economy. We can thus respond to what we have called the initial question with a revealing question of our own: “What can’t you do with a philosophy degree?”

This entry was posted on Monday, March 16th, 2015 at 2:51 pm and is filed under Philosophy. You can follow any responses to this entry through the RSS 2.0 feed. You can skip to the end and leave a response. Pinging is currently not allowed.

2 Responses to Why study philosophy?