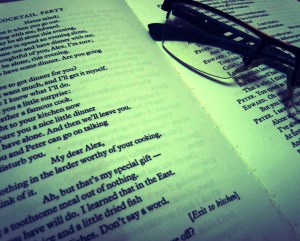 Books, how educational are they today? We all like to read, but the question is: what is the content of the books we read? And on what basis do we select the books we want to read? Why are there so many underrated talented authors who are writing down lines of poetry on scraps of paper and at the back of bills, and no one gives them a second look? Why are so many writers who are worshipped by large numbers despite their works having not much literary worth? Such were the questions I was musing today; I realised that I must board the time machine, and delve into the recent past, to find the answers.

The aesthetic school of thought became prominent in Britain in the 19th century, though its precursors propagated this belief extensively through their works in the era of Romantic poetry. It seeks to validate that the sole purpose of the Arts is to provide sensuous pleasure, rather than establish or reinforce existing normative social behaviour and values. The Artist is not obligated to adhere to the moral/conventional standards of society and convey ethical or social messages. As such, the pioneers of this school of thought in the literary field, like Wilde and Swinburne were censured tremendously after the publication of their works.

Now we must keep in mind that this school of thought was popular because it defied a multitude of restrictions of the Victorian society. Women writers were held in contempt, there was virtually no freedom of expression, any literary work which transcended the defined lines of societal norms, gender norms or religious beliefs was rejected by the majority of the intellectual society and considered controversial. At such a time, this “revolutionary” school of thought held much importance in the minds of the writers, to an extent that, for decades after the emergence of aestheticism, classification of fiction seemed to be based on whether it was aesthetic or not.

I have discussions among my comrades on questions like: What constitutes literature? What are the parameters by which we decide what works can be considered as literature? How do we distinguish pure literary talent from the plethora of fiction that is being written and read by people today? And to this, different people have given me different answers, but the most common among them being: Any literary work that is beautiful and strikes the emotions in a reader is literature.

But honestly, is that all literature must be? Emotions and beauty? Does is not have any role? Is it not capable of provoking society beyond the personal level? Do books like Hard Times and A Passage to India, which satirized socio-political conditions of the British society any less than Romantic poetry of Keats and Shelley? We must not forget that besides elevating moods, literature has in the past, also brought about revolutions, influenced the minds and agendas of world leaders, and rewritten history.

Have we not, behind the mask of propagating the aesthetic belief, been undermining literature and its potential to transform society and likewise, the entire development of the individual? Needless to say, aestheticism served its purpose during the 19th century; but what is its relevance now? We live in an age of democracy. Women are considered to be at par with men when it comes to literary talent, civil and political liberties have been granted, freedom of expression characterises this modern age. Why then, do we stubbornly stick to an outdated school of thought?

We as writers, literary theorists, and students of literature, can wield the weapon of literature and use it effectively to change the perceptions of the population. It is we, who define what literature is; what literary work is worthy of study. We set the boundaries of the vast realm of literature. There was a time when literature was worshipped among young readers and old. But now the quality of literary fiction has gone down so drastically, that almost everyone we see has his face hidden behind some book, but when I read the title on the book cover, I cringe.

Listening to me, you might think I am being judgmental. Don’t get me wrong, I am, by no means, critical of anyone’s taste in reading. I am simply devastated seeing how the marketing hype has brainwashed minds to such an extent that hardly anyone now has heard of talented writers simply because their books do not fall in the category of “cool”. It’s almost as if all these popular books are standing on the book-stands of shops squealing out to the bystanders, ‘Pick me! Pick me!’

Once upon a time, there was no or relatively less difference between bestselling fiction and classics. However, the case is different now. Pseudo-intellectual writing has adulterated the society to such a great extent that, that it becomes very hard for the common reader to clearly lay a demarcation between which works display talent, and which are written for instant commercial success. As a consequence, those reading literature are now confined to universities only. Moreover, they are ridden off as “nerds” by the general younger public. In earlier times, literature would infiltrate the society through the universities and gradually make its way into the minds of the general public. Now the flow of intellect is reversed, instead of flowing into the society, literature is born and stays within the limited circle of students, professors and theorists. In all true senses, it is a dystopian world we are living in!

But why are we quiet? Why don’t we take back the monopoly of literature and wield its power to bring back the appreciation for true talent and Art? It is in our hands now. We must once more establish the lost worth and legacy of literature among the masses. After all, ‘The pen is mightier than the sword,’ is it not?

Sadhika is studying the BA English by distance learning in India.

I am from India and currently studying BA in English. After completing this degree, I plan to pursue my master’s in English. My hobbies are reading, writing, painting and music. Other than these, I also have a keen interest in politics, social issues, and world cultures. I hope to become a writer and a social worker someday. I am here contributing to this blog because I believe that communication of our ideas among the student community will help us develop as individuals as well as give us an insight into the different study experiences of students around the world.

This entry was posted on Friday, March 13th, 2015 at 3:58 pm and is filed under English. You can follow any responses to this entry through the RSS 2.0 feed. You can leave a response, or trackback from your own site.