One frustration most philosophy students share is a consequence of the gulf that exists between what the study of philosophy actually involves, and what many people who have never studied philosophy – which includes most of our family and friends and acquaintances — think it involves. 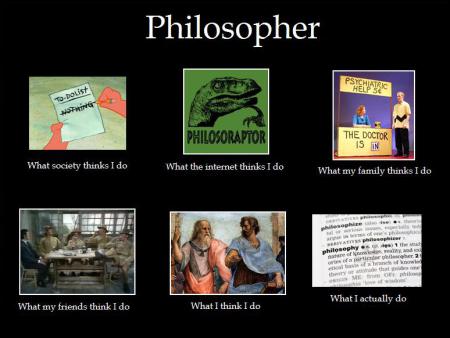 Some will confuse philosophy with psychology, or with religion, or (thanks to bookstores with ‘Metaphysics’ sections) with new-ageism. Others conflate academic philosophy with ‘having a philosophy of x’ – say, of life or of relationships or of business. And too many confuse serious philosophizing with the sort of bull-sessions one frequently witnesses on television shows or in movies that feature stoner-types as prominent characters.

So, what is philosophy? First, philosophy is an activity – it’s primarily something that you learn to do, not primarily something that you learn about. It’s one thing to know what Plato or Kant or Wittgenstein thought about a particular issue; but it’s another thing entirely to engage philosophically with the thought of Plato or Kant or Wittgenstein. Indeed, we learn about philosophy mainly because it helps us to do philosophy better than we would if we instead had to reinvent the subject. For it often provides us with a place from which to begin thinking philosophically, usually in the form of crisply defined questions or puzzles, and (usually) somewhat less-crisply formulated answers to them.

But although the distinction between doing philosophy and learning about philosophy is important, it doesn’t get us very far. For it doesn’t answer the question, ‘What is it we do when we do philosophy?’ I shall attempt to sketch an answer to this question below by examining a number of quotes from prominent philosophers on the nature of philosophy.

True enough! And since it’s the term ‘thinking’ that does the real work in that quote, we learn from Plantinga that philosophy differs from science and history and other disciplines insofar as thinking alone, and not experimenting or researching, is central to it. (This fact was well put by Gareth Evans: “A rather embarrassing occupational hazard for a philosopher is that [the] moments when he’s most hard at work are those where he’s most indistinguishable from sleeping.”) Now by ‘thinking’ Plantinga means reasoning, or examining the arguments and evidence adduced for accepting or rejecting some conclusion. But what is it to think ‘hard’ in the philosophical sense?

This definitely helps – indeed, it’s one of my favorite attempts to explain what philosophy is. For ‘thinking in slow motion’ involves unearthing and examining assumptions, questioning the truth of every premise, examining the logical connections between premises and conclusions, and so on. So when we do philosophy, we think very carefully and very critically, examining to the extent that we can every claim – whether explicit or implicit, factual or logical — that a particular argument presents us with. Now we have some idea of how philosophers think, but we’re still not at all clear on what it is that philosophers think about.

“[To do philosophy], [y]ou have to allow yourself to be astounded by things that any sane person takes for granted…When you begin working on a philosophical question you have to be totally naïve…Then you have, at some point, to…become immensely knowledgeable, rigorous, and sophisticated.” – John Searle

We learned from Campbell that philosophers question every element of a chain of reasoning. And now we’ve learned from Searle that philosophers question very normal, everyday phenomena that we often accept as the unproblematic deliverances of common sense. For example, when I used the name ‘John Searle’ in the quote above, anyone reading this post would naturally take those words to refer to a specific human being who happens to be a philosopher. But how does that happen? How do marks on a page (or screen), or sounds from my mouth, succeed in ‘hooking up’ to the specific person they purport to name? That’s an example of the sort of question most of us never consider, but that philosophers take very seriously indeed, and have even tried to answer. And, as Searle indicated, when those answers are ultimately formulated, they often involve tremendous complexity and sophistication. But can we say anything else to provide us with a more robust idea of the subject matter of philosophy?

While Sellars’ quote is incredibly insightful, it’s best understood ‘from the inside’, i.e. after you’ve done some philosophy. So maybe an example will say more, and say it better, than a merely straightforward attempt to elucidate the quote without one will say. Suppose a scientist observes a correlation between some natural phenomena x and y. She may ask, ‘does x cause y?’ and proceed to devise experiments and make predictions to test that hypothesis. And she may do this for any number of similarly correlated natural phenomena she observes. A philosopher, on the other hand, will broaden the question significantly by asking, ‘What is a cause?’ thereby in a sense inquiring about what links all possible causal phenomena that the scientist, or anyone for that matter, might investigate. While that example may not render Sellars’ quote perfectly perspicuous to those who have never studied philosophy, I hope it does at least help to illuminate what it is that he’s getting at.

‘But what’s the point?’ you might ask. ‘Haven’t philosophers been spinning their wheels for thousands of years, asking and trying to answer the same old questions about free will, the existence of god, the ground of morality, and so on? Why bother engaging in an activity that never produces definitive answers, and hence never really progresses?’

First, I’d want to distinguish the notion of finding a conclusive answer to a particular question from the notion of making progress vis-à-vis that question. For it certainly seems possible to succeed in the latter regard even if we fail in the former regard. The next quote will help clarify that distinction.

“Philosophical theories are never refuted conclusively…The theory survives its refutation—at a price. Argle has said what we accomplish in philosophical argument: we measure the price.” – David Lewis

Lewis, I think, successfully gets both at the sense in which philosophy progresses without providing conclusive answers, and at the very nature of philosophical inquiry itself. We may never conclusively settle most of the seemingly perennial questions of philosophy, but it doesn’t follow that we’ll therefore never make philosophical progress. For to the extent that we’re ever more accurately ‘measuring the price’ we must pay to adopt various philosophical positions – that is, discovering what accepting a position commits us to, both in terms of what further claims we must accept, and those we must reject – we’re deepening our understanding of that position, and of its logical interrelations with sundry positions that may have at first seemed only remotely connected to it. And once we know ‘the price’ we must pay to adopt a particular view, we are in a position to exercise not our philosophical acumen, but our perspicacity and wisdom and judgment. That, I submit, constitutes incontrovertible progress.

So, am I saying that philosophy, insofar as it primarily aims to ‘measure the price’, therefore does not aim to uncover The TruthTM about things? I’ll once more turn to David Lewis, and close this post with his response to that question.

Listen to some leading philosophers attempting to answer the question, ‘What is philosophy?’ here.

5 thoughts on “What is Philosophy?”