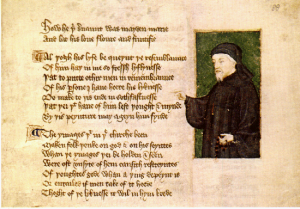 Well, historically it is important to note that Chaucer was not the only poet to make a connection between birds mating and St. Valentine’s day.  John Gower, Otton de Grandson and a knight called Pardo from Valencia had all used the same device. Those more biologically minded amongst you can’t perhaps have noted that February 14th is somewhat early for any Northern Hemisphere birds to be mating. Indeed it seems quite likely that Chaucer was in fact referring to May 3rd (this corresponded to the “celebration in the liturgical calendar of Valentine of Genoa, an early bishop of Genoa (d. AD307)”; and all of this complicated by the adoption of a new calendar, when in 1582, 10 days were essentially omitted (thus restoring 21 March as the date of the vernal equinox) and the Gregorian calendar established.

Calendar details aside (though to this day the Eastern Orthodox Church celebrates St. Valentine’s day on July 6 and 30, the Brazilian Dia de Sao Valentim falls on June 12th whilst here in China the equivalent 七夕節 falls on the 7th day of the 7th lunar month); there has additionally been a great deal of debate as to which of the saints Valentinus St.Valentine’s Day actually refers to, and what he actually did to secure his canonisation. The most enduring hagiography refers to Saint Valentine of Rome stating that:

“he was imprisoned for performing weddings for soldiers who were forbidden to marry and for ministering to Christians, who were persecuted under the Roman Empire. According to legend, during his imprisonment, he healed the daughter of his jailer, Asterius. An embellishment to this story states that before his execution he wrote her a letter signed “Your Valentine” as a farewell.”

Others writers have made associations with Lupercalia, a Roman (possibly even pre-Roman) fertility festival celebrated between February 13-15th. Few will know that in Padua, Italy, St. Valentine’s keys are given to children to ward off St. Valentine’s malady (epilepsy), whilst in some of my LLB colleagues’ countries it will be outlawed or viewed with a degree of suspicion as an unseemly celebration of depravity and immorality, requiring it to at the very least to be celebrated behind closed doors. 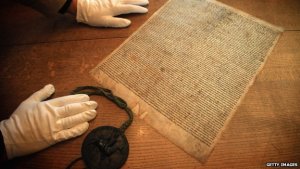 What are we to learn from such machinations; well as I enter week 5 of my Coursera Magna Carta MOOC (which if any history or LLB students aren’t following, they should) I begin to really see the beauty and intricacies of any historical/legal/socio-political study programme. We would do well to take little for granted, and rather than see our studies as some kind of preformed package holiday it might do well to reframe them as something of an adventure; don’t be scared to take a few byroads, slip into a few caves, explore the nooks and crannies for it is there that history is truly to be found and the truth behind any stories, however appealing and romantic they may be, lays to be discovered.

I can only presume that it was such curiosity that fuelled one of the most remarkable recent news stories when Kent archivist Mark Bateson stumbled across a previously undiscovered copy of a 1215 Magna Carta in a Victorian scrapbook.

So when your energies are waning you might do well to remember the words of Stephen Stills’s wonderful song and even though your studies might seem something of a thorn in your side and your concentration be slipping away, “you got to do something” and that very something might be to “turn your heartache right into joy”.

There are greater things at stake so it might just be time to “love the one you’re with”.

Ansgar, 1986, Chaucer and the Cult of Saint valentine

Frank Staff, The Valentine and Its Origins

The Magna Carta and its Legacy – https://www.coursera.org/course/magnacarta

This entry was posted on Saturday, February 14th, 2015 at 9:58 am and is filed under LLB. You can follow any responses to this entry through the RSS 2.0 feed. You can skip to the end and leave a response. Pinging is currently not allowed.