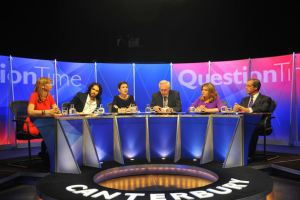 Last month, an episode of the British current affairs debate show ‘Question Time’ was one for the history books. Refreshingly, the panel was dominated by women; journalist Camilla Cavendish, Labour MP Mary Creagh, and Conservative MP Penny Mordaunt. Between them, the three were the bastions of civility, and reasoned political debate. They were joined, however, by ‘comedian and campaigner’ Russell Brand, and leader of the UK Independence Party (UKIP) Nigel Farage. I shall refrain from describing too much of the episode in this blog – you should watch it – except to say that there were several occasions of volatility amongst the panelists, and even amongst audience members. The main point I want to focus on here is a point which was raised during the programme, namely that of representative government.

A great deal of political sentiment in the UK presently revolves around voters feeling disenfranchised, and under-represented by the selection of political parties available. This is due, in part, to the highly ‘majoritarian’ electoral system. Within this system, there are as many seats in parliament as there are constituencies across the country. Voters vote for one candidate, and the candidate with the most votes in any given constituency takes the seat. Expanding this to a national level, the party that takes the most seats (usually) forms the government. This system tends to favour larger parties (as voters vote tactically to avoid ‘wasting’ a vote on a smaller party with no chances of success) and often leads to a single-party government. This also often leads to limited choice in terms of parties running for election, exemplified by the dominance of Labour, the Conservatives, and the Liberal Democrats in the UK. Whilst single-party governments can be more accountable, and can often react to events faster (their majority in parliament places less restrictions on bills being passed), the constitution of the governments they form are not necessarily representative. Remember, all they need to win is the majority of the votes. This essentially renders the votes of those whose candidate is not elected in their constituency, redundant. Is there any way around this? There are alternatives, one of which an audience member during Question Time briefly described.

Would shifting the electoral system to proportional representation help in the case of the UK? It would certainly offer a greater level of representation, a process which might re-engage a portion of the electorate as the current dominant parties do not necessarily reflect the existing socio-political cleavages within the country. But another grievance raised by audience members on Question Time was that of political in-fighting, or ‘Punch and Judy’ politics. If the UK’s current coalition government is anything to go by, proportional representation certainly would not deal with this issue. With the UK’s 2015 general election approaching fast and with issues of poor political engagement hot within the media, it will be interesting to see how each political party attempts to bridge the divides and gather votes.

The run up to May will certainly be a nail-biting period for the UK’s political leaders. But as voters go to the polls, many of us studying with UoL will be sitting our exams. The exam timetable is now available on the UOLIA website. With this in mind, I wanted to share with you some study tips which I have found useful and effective.

The Pomodoro technique employs regular intervals of studying and breaks, in order to keep you as refreshed and creative as possible. The most common division is 25 minutes of studying, followed by 5 minutes rest, constituting one ‘pomodoro’. It’s a popular technique among productivity types online, and I’ve found it to be quite effective. Prior to using it, I would sit and slog through pages and pages of Cold War history or dry political science papers, only to find myself mentally exhausted and drained by the end. Since using the Pomodoro technique I have found that I can study for longer, feel far less fatigued, and remain for more focused throughout. As a bonus, I use an app called ‘Pomotodo’ which not only functions as a timer, but also logs my efforts and provides charts and graphs so I can monitor and improve my work habits. And what exactly is a ‘pomodoro’ I hear you ask? Pomodoro translates from Italian to English as ‘Tomato’, giving its name to the technique allegedly because that was the shape of the timer its creator used.

Use a Book Stand

This may be nothing new to some of you, but recently I started using a book stand in order to hold up my larger text books. The stand I currently use is actually intended for recipe books, but serves my purposes nicely. Not only does it clear space on your desk but it also allows you to read at a more comfortable and natural angle, reducing the potential for neck strain.

‘Multimedia’ as a word feels like a bit of a throw back to an earlier time, but it’s highly relevant here. It’s so easy to get bogged down in thick academic texts, or the study guide, and feel hopelessly like you’re making no progress. But, help is at hand! In order to test and expand my understanding, I have drawn on a variety of resources. LSE offers free-to-all public lectures most evenings, and whilst this requires you to be in London, podcasts of these lectures and events are posted online. Additionally, if you’re studying International Relations or Politics, there are many useful YouTube channels, such as the Council On Foreign Relations, LSE’s own channel, Cold War documentaries, or the more general interest debates from Intelligence Squared.

The above three items have worked brilliantly for me, but your milage may vary. At the end of the day, so long as you’re turning up and turning the pages, you’re going to make progress. You just have to work out what works best for you, and stick at it. If you have any particular techniques, methods, or resources that you find particularly useful, please share them in the comments below. Happy studying everyone!

This entry was posted on Friday, January 9th, 2015 at 10:02 am and is filed under Courses directed by LSE, International Relations. You can follow any responses to this entry through the RSS 2.0 feed. You can skip to the end and leave a response. Pinging is currently not allowed.