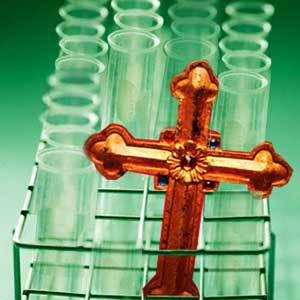 The relationship between science and religion is a fascinating and complex one. To many it comes as a surprise that science and religion have a relationship at all! Yet a little study unearths amazing facts and leads to deeper appreciation of the complexity and nuances of both science and religion and their at times love-hate relationship – good examples are  God’s Philosophers: How the Medieval World Laid the Foundations of Modern Science by Dr James Hannam and Reason and Reality: The Relationship Between Science and Theology by Prof John Polkinghorne. The surprise factor is reduced however when one considers the word “science” itself, originating as it is from Latin scientia (knowledge). Science is one of the ways of discovering and understanding the world around us – a very successful way of course, but by no means an unlimited or the only one.

It is impossible to do any justice to such a complex subject in a blog post, so I will only focus on an interesting statement by Prof John Lennox, Professor of Mathematics at University of Oxford, author of  God’s Undertaker: Has Science buried God? and an outspoken Christian, who once remarked that

Not all statements by scientists are statements of science, and so do not carry the authority of authentic science.

I think this short statement gives good insight into the often problematic relationship between scientists and religion. It is important to ask every time we hear from a scientist  whether he or she is making a statement of science or not. If a physicist for example makes a statement about physics, we better listen – her opinion is of more weight and value than someone who has never studied physics or has only elementary grasp of it. But if a physicist expresses an opinion on, for example, hagiography, one is justified to ask on what basis that opinion is formed and why should we pay any attention to her opinion over and above opinions of anyone else? To illustrate this further we could say:

Clearly, if your parish priest suddenly starts talking about aetiological epidemiology from the pulpit we could justifiably ask how his theological education and pastoral work equip him to claim authority in epidemiology? And the simple answer is that it doesn’t. That is of course not to say that a physicist cannot have an opinion on theology or a theologian on epidemiology, just that their opinions do not have the authority of, respectively, science or theology (unless they happen to be both scientists and theologians like Prof Polkinghorne – a rare combination indeed).

Medieval Church was guilty of claiming authority in matters of [proto-]science far removed from Christian doctrine; some contemporary scientists are in my opinion guilty of claiming authority over matters of faith, theology or religion far removed from objects of science – unless of course they are proponents of scientism and claim that only they and their discipline hold the keys to reality and meaning. But that’s a subject for another post…

This entry was posted on Wednesday, March 6th, 2013 at 3:41 pm and is filed under Theology. You can follow any responses to this entry through the RSS 2.0 feed. You can skip to the end and leave a response. Pinging is currently not allowed.

One Response to Science and religion