It could be an overdue library book. Alas, you just don’t seem to get past the first half of it, or perhaps even beyond the first chapter. Worried about the increasing fine, you return it to the library two months later: unfinished. To assuage your guilt, you promise to read it thoroughly the next time you borrow it. To prove a point, you return to the library a week later, rummage through the shelf for that same book. But the cycle returns, so does the fine from the library.

We are all guilty of having owned one such book. Perhaps, we own a whole bookcase of them. And, now, if you are sniggering, thinking that this can’t be happening to you because you own a Kindle, well, we all know about the escalating list of downloaded eBooks that suffer the same fate – unread.

Like it or not, in this era of gadgets, all of us have the syndrome of the ‘distracted reader’. And, this syndrome is all the more threatening when we are doing a university course, having to digest a varied diet of materials to read. Time is seldom on our side, and being a distracted reader, it gets even worse. 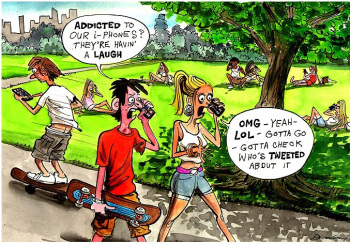 Today’s world is the digital world─a world where social media has become a large part of our lives: it is a world where mobile phones and the internet are as necessary as, perhaps more important than, food. According to Frances Booth, the author of The Distraction Trap, we are entangled in the trap of digital distraction:

“Digital distraction means our behavior has suddenly changed. Without noticing it, we’ve become caught in a trap. We’re damaging our relationships, increasing our stress levels, and literally rewiring our brains.”

Booth feels that most of us are under the illusion that we are, actually, capable of doing ten things at once: we imitate the digital world, which functions and moves at an incredibly high speed. Therefore, we want to eat, watch TV, send text messages, check emails, and download music, all at the same time. But we have forgotten that we are not super humans but common mortals, whose brains are continually being rewired by all these experiences. In the process, we are losing our innate ability to use and apply our attentive powers. 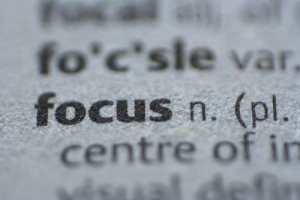 “The key to memory consolidation, or depth of understanding, is attentiveness; the opposite of what happens when we text, chat, surf and tweet at the same time,” says British journalist Helen Kirwan-Taylor. Having the ability to memorise the names of the critics, and to reach a full understanding of their works are, indeed, the challenging skills we need when we are studying.

Booth also explains that the digital world gives us the impression that nothing comes to a standstill. While a book has its end, the internet doesn’t. Hence, there is always an urge to absorb as much information as possible with whatever time that we have. However, instead of becoming smarter, our attention that is used to retain information has been diluted. So, it could be said that we are only smart for those few seconds, because the knowledge, we thought we have gained from the internet, evaporates as soon as it comes.

Nicholas Carr, the author of The Shallows, quotes a scholar from New York University who believes that no one reads Tolstoy anymore: people find him too time-consuming. Surfing the web seems more superior and rewarding. Carr posits that illusionary belief is due to how the digital world has moulded our brains:

“Dozens of studies by psychologists, neurobiologists, educators, and Web designers point to the same conclusion: when we go online we enter an environment that promotes cursory reading, hurried and distracted thinking, and superficial learning. It’s possible to think deeply while surfing the Net, just as it’s possible to think shallowly while reading a book, but that’s not the type of thinking the technology encourages and rewards.”

Fortunately, all is not lost. Because, those sneaky little electronic things that are responsible for luring our attention away and stealing our precious time, could be easily handled. Yes, according to Booth, they could be dealt with just by the flick of a switch.

Booth is not, however, suggesting that we should, without delay, mercilessly snip off the wires of our computers. Neither should we trash our much adored iPhone 6 or Samsung Note 4 down the chute, and move to the Himalayas without informing anyone, lugging only a bag of books that we aim to thoroughly digest before our exams. That would be totally unrealistic, and in my opinion, doing much more damage to the relationships we have in our lives. 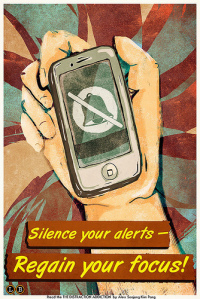 What Booth wants us to do is to taste the “nirvana” of focus by first eliminating the buzzing-, blinking-, beeping-connected world. To gain this focus, she suggests, we ought to create a sense of flow by engaging ourselves in an activity after switching off the digital distractions in our daily life. Such activities could be gardening, knitting, cooking, writing, etc., 10 to 15 minutes in the beginning, she feels, is sufficient to create a sense of tranquility, and is adequate for one to notice the difference.

I tried Booth’s method one afternoon, and my 15 minutes of focus stretched to two hours, without my even realising it. I managed to finish reading the remaining Book II of Thomas More’s Utopia, something which I consider a great achievement for the week. During those two hours, my Whatsapp and Line Chat accumulated a number of 18 unread messages. And as I read those messages one by one, after my two short hours as a recluse, I realised that they weren’t anything that needed attention urgently.

If our occupations and our lifestyles don’t require us to be contactable 24/7, we could consider giving the “nirvana” of focus a try. I believe it will prove to be productive, albeit if it is for only 15 minutes.

This entry was posted on Monday, November 17th, 2014 at 3:00 pm and is filed under English. You can follow any responses to this entry through the RSS 2.0 feed. You can skip to the end and leave a response. Pinging is currently not allowed.