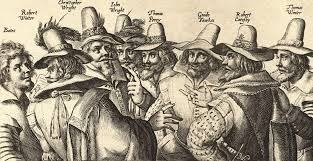 For any of you who happen to be in the UK (or have happened to be so in previous years) I won’t need to tell you what today (being November 5th) represents. It is of course Guy Fawkes Day; for it was on this very same day, now some 409 years ago, that in the very early hours of the morning that John Johnson (as he gave his name at the time) whilst standing watch over 36 barrels of gunpowder hidden in an “undercroft” directly beneath the House of Lords was arrested and the treacherous “gunpowder plot” was unmasked. The catholic conspirators (of which Fawkes was just one of thirteen) were planning to assassinate the protestant King James and by so doing pave the way for a catholic sovereign in the form of his daughter Princess Elizabeth. 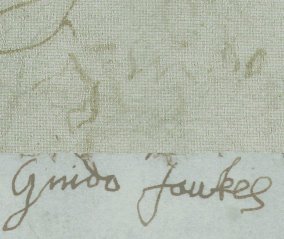 Two signatures, before torture (below) and after torture (above).

After copious torturing (and witness the famous “two signatures” of Guido (as he was also known)) Fawkes finally confessed, implicating his fellow plotters including Francis Tresham who was quite possibly the source of the anonymous letter that led to the plot’s downfall. In spite of his innocent plea (quite extraordinary and memorable in itself!!!), Fawkes and the others were found guilty of high treason and the Attorney General (who at that time was none other than Sir Edward Coke) announced:

each of the condemned would be drawn backwards to his death, by a horse, his head near the ground. They were to be “put to death halfway between heaven and earth as unworthy of both”; their genitals would be cut off and burnt before their eyes, and their bowels and hearts removed. They would then be decapitated, and the dismembered parts of their bodies displayed so that they might become “prey for the fowls of the air”.

And so fast forward (lest I lose your interest) to the Old Palace Yard at Westminster 31 January 1606; Fawkes was the last to ascend the scaffold. Having already witnessed the above outlined gruesome fate of three of his fellow “treasoners” (forgive me if no such word exists) Thomas Wintour, Ambrose Rookwood and Robert Keyes; Fawkes was having none of it. And though weakened by weeks of imprisonment and torture in the Tower he found in himself one final burst of energy and in an ultimate act of defiance hurled himself from the scaffold, depriving the hangman of his final pleasure and himself this ultimate ignominy.

The day has been celebrated ever since with bonfires (in which historically effigies of the pope though more recently of Guy Fawkes are burned (this being the historical source of the word ‘guy’ in modern American English)) and nationwide “firework parties”, though this latter custom did not take hold until the 1650s; there was even an Act of Parliament passed (the Observance of 5th November Act 1605) designating each 5 November as a day of thanksgiving for “the joyful day of deliverance” introduced on 23rd January 1606 by Edward Montagu in the following terms:

Forasmuch as almighty God hath in all ages showed his power and mercy in the miraculous and gracious deliverance of his church, and in the protection of religious kings and states, and that no nation of the earth hath been blessed with greater benefit than this kingdom now enjoyeth, having the same true and free profession of the gospel under our most gracious sovereign lord King James, the most great learned and religious king that ever reigned therein, enriched with a most helpful and plentiful progeny proceeding out of his royal loins promising continuance of this happiness and profession to all posterity: the which many malignant and devilish papists, Jesuits, and seminary priests much envying and fearing, conspired most horribly, when the king’s most excellent majesty, the queen, the prince, and the lords spiritual and temporal, and commons, should have been assembled in the upper house of Parliament upon the fifth day of November in the year of our lord 1605 suddenly to have blown up the said house with gunpowder, an invention so inhuman, barbarous and cruel, as the like was never before heard of.

Now that was a very long paragraph (two in fact) and there were a lot of facts but I am prepared to wager the one fact that you will here on in out never forget (and I will be testing you next month) is Fawkes’s final demise. Why exactly we may ask ourselves; well because firstly it is surprising (not the least one might imagine to the hangman), secondly it is not widely known (most students of history would know or if not guess that he was executed but not this final twist in the tale) but I think perhaps most importantly because it has an element of magic in it. Faced with this absolutely ghastly fate, this man, described by Antonia Fraser as:

“a tall, powerfully built man, with thick reddish-brown hair, a flowing moustache in the tradition of the time, and a bushy reddish-brown beard. A man of action … capable of intelligent argument as well as physical endurance, somewhat to the surprise of his enemies.”

had one final “surprise” in his armoury and so he went down in history; though only one of many (as we have learned three others were executed that self same day) he is the one we remember and if we’re honest even as true blooded English subjects, loyal to crown and country, we remember him with a wry smile and just a touch of admiration.

The second fact which I am sure none of the LLB students (which included me until I started my research for this piece) would have known but won’t rush to forget is that there was an actual statute passed in honour of this most memorable of days. But rest assured before you start calling up Oxford University Press and demanding a new copy of Blackstone’s statutes; it was repealed in 1859.

Meanwhile all the English students will be already pawing their Etymology Dictionaries and I hope the point is made, or if not sufficiently made for me to leave it for now and pick up on it next month.

This entry was posted on Wednesday, November 5th, 2014 at 10:42 am and is filed under LLB. You can follow any responses to this entry through the RSS 2.0 feed. You can skip to the end and leave a response. Pinging is currently not allowed.