Better done than perfect! Studying in the gaps…

Oh, did the academic year start again already?! Yikes… I must have missed the memo… or it could have something to do with my mushy postpartum brain.

A week before the school year began again, our little boy made his entrance into the world and he’s now a month old.  We’re vaguely ‘emerging’ from that postpartum haze and hubby has been waiting on me hand and foot, becoming quite the Jamie Oliver, and being a total star champ A+ support.

I’ve spoken before on this blog about how much I appreciate the flexibility of the UoL programme, and that couldn’t be more so the case than now. Now that I’m a brand new Mum, with all the uncertainty that entails, to know that I can just chip away at whatever I can manage, and defer whatever I can’t, is a real relief!

So chip away I am trying.  Of course, I made some kind of study plan and it has already gone out the window.  With my dear little one tending to set the schedule, including when we’ll have growth spurts that demand round the clock feeding, or when we’ll get viral infections that land us overnight in hospital, or when we’ll get overtired and just be unable to get to sleep… trying to keep to any other schedule, like a study schedule, is a bit ambitious right now. (I’d like to hear from someone studying with a baby and a toddler…hats off to ya!) 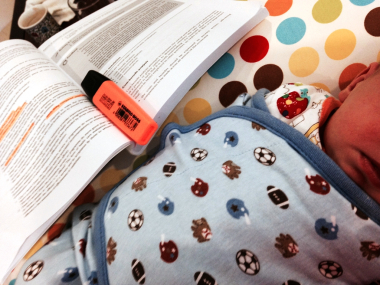 That said, here and there I can get a bit of study done.  In fact, I’ve mastered the art of breastfeeding at the computer (hurrah for nursing pillows!). Depending on the feed and the angle, I can sometimes even read my textbooks and highlight as I need to.  See photographic proof!

Anyhow, as I am probably a small minority of students who currently double as a milk machine and nappy changer, that’s probably more than enough about studying as a new mummy. Instead, I thought I’d share some of my favourite new study aids and ideas that are making the 2014 academic year a ton easier to attack than the 2013 year.

First off, Habit List.  This is an app that I downloaded on iPhone and frankly, it’s helpful not just for study, but more for keeping up with life in general.  It’s there to help you make sure you do all those things you really should do each day or every week, every month, every few days, every Saturday etc.  For example, I want to make sure I eat plenty of veggies, take certain supplements, make sure I bath the baby every few days (I know, I need to be reminded…), be sure to Skype my Nana every week etc.  I can keep adjusting the habit list and the frequency of the habits, and the order they’re listed, so that each day, instead of a To Do list, I basically just have a list of habits that I work through in a certain order each day. With a postpartum mushy brain, it makes it a lot easier than trying to remember.

Second, Evernote.  I sometimes feel like the last person on the planet to discover Evernote. But hopefully one of you reading this can confirm that I’m not by the fact that you’re not sure what I’m talking about. If so, I’ll leave you to your own journey of discovery. Evernote’s tagline is something like “Remember Everything.”  I have a MSc ‘notebook’ with various notes for each of my modules.  I downloaded key documents (admin reference docs, class readings etc) and have them pinned in my notes so I can open them on any device no matter where I am instead of having to log in to Moodle or store them somewhere in a folder on my computer.  The ideas are really endless what you can do with Evernote.  I paid for the Premium upgrade – given that I probably look at Evernote several dozen times a day and I use it to store everything from school work, to my writing, to recipes, to family and household info, a $50 price tag (or thereabouts) per year is a smart use of my money!

Third, day after review.  I’ve always known that it’s really valuable to review what you studied the day before.  I’ve always been really slack about actually doing that. But this year I’m determined.  The thing is, given how our course is structured (one assignment end of March, one exam in June), it’s too easy to go through the syllabus earlier on in the year and then forget it all by the time you get to the exam such that you’re having to start afresh. To really have something to work with when exam time comes round, I am trying to get disciplined about reviewing the following day – even if I’m not able to write notes, at least page through the chapter while I’m feeding bub.

Fourth, doing something everyday.  Now, this may not be the case for others, but I found that I ended up putting off my studies for several weeks at one point during last year, because I kept thinking “No, I need to wait until I have time to concentrate, time to ‘get into it’…”  Linked to the point above, I have a feeling there’s more benefit accrued from chipping away at it day by day. Even if I don’t achieve what I planned, which tends to be the case most days (did I mention that I threw the plan out the window? Oh, I did already? Ergh…), at least read something or review something. That keeps the mental skids greased, so to speak. Now that my first priority is looking after bub, I can’t afford to put off the study until I can guarantee three hours uninterrupted, because there just aren’t those times anymore!  I’ve got to be able to study here and there in the gaps. Is it the ‘ideal’ academic set up…probably not.  But as some wise person said once, it’s “better done than perfect!”

So there you have it. Those are my favourite new tools and ideas.  What are you doing differently this year compared to last to make the study more approachable, easier, more likely to succeed?

Lucy is studying the MSc Public Health by distance learning in Bangkok, Thailand. She is originally from New Zealand.

This entry was posted on Friday, October 24th, 2014 at 12:55 pm and is filed under Courses directed by LSHTM, Public Health. You can follow any responses to this entry through the RSS 2.0 feed. You can skip to the end and leave a response. Pinging is currently not allowed.