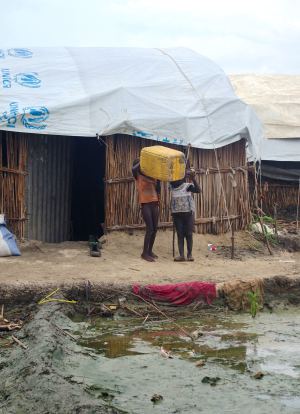 Children drink water at the Protection of Civilians site in South Sudan.

Hello all. I hope everyone else was as pleased with their exam results as I was. Logistical issues as alluded to in a previous post notwithstanding, I passed all three of my exams and even, dare I say it, did quite well. With that in hand and my interest in the subject continuing to grow, I’ve decided to switch to the full MSc in Public Health (general stream), rather than just doing the PG Cert. Quite a big decision, not least financially, but I’m happy that it’s something I enjoy and will benefit me in my career. A career which, (unsurprisingly) has taken me back to South Sudan.

After nine months away I cannot say I like what they’ve done with the place since I was last here – an ongoing war coupled with severe food insecurity and multiple ethnic massacres – however I am honestly happy to be back. I am now working at one of the Protection of Civilians sites, which I can truly say must be one of the worst places in the entire world for the estimated 40,000 people living in it. Severe flooding coupled with a dearth of latrines and a lack of knowledge about disease and proper hygiene practices means that water and sanitation is the big issue here at the moment, and I could write a lot about it. However, I wanted to write about the one very small aspect of sanitation that I am involved in, and that is burials. 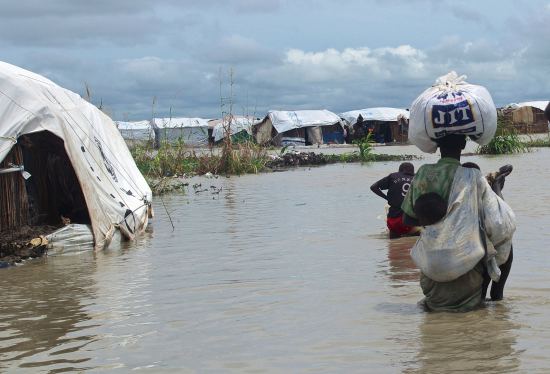 A woman with her baby moves through a flooded area of the Protection of Civilians site.

Burying the dead is not an aspect of sanitation I’d really thought about that much before, but of course, someone has to do it. And especially in a place like here, where it is not safe for the people living here to leave the camp, it’s something that NGOs have to take responsibility for. I’ve suddenly learnt an awful lot more about best practices in management of dead bodies than I would ever have thought I would. Considering how deep the bodies need to be buried, how far the gravesite should be from the side of the road, what protective gear the staff doing the actual burying have and whether that is adequate, and so on. Given the nature of the place we are in and the ongoing and unfolding emergency, things are very basic, and certainly a lot needs to be done to improve. It’s easy to get caught up in the office in the practicalities of the potential spread of disease – What do we do if we get cholera here? Ebola? – and to forget the human drama behind it all. And then you attend a burial, and it all comes very painfully clear. Although you are still looking to see whether your staff are wearing their medical gloves, whether the body bag is holding up and preventing leakages, whether a sufficient depth of soil is piled on top, these things do fade into the background against the human reality. The indignity of having to get an armed escort of UN soldiers to accompany the burial team and a few relatives to the gravesite, standing guard with AK 47s and body armour as the team struggle to dig loosen the heavy clay soil piled by the graves to cover the bodies. Watching a mother carry the tiny white plastic bundle that is her 3 year old daughter who died yesterday of severe dehydration, to deposit into the ground at the same time as two women in their 50s. The simple funeral services, at one of which the person speaking merely said to me ‘With the war in South Sudan, we see a lot of people die. Some live and others die, that is it’. Standing in the bucketing equatorial rain soaked to the skin listening to people pray in a language you don’t understand. 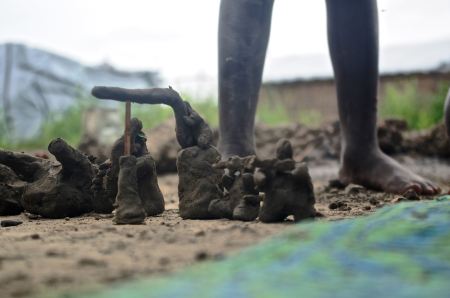 A child’s toy army made from mud.

One of the first things I did was to order some local wooden poles, so proper wooden crosses could be made, rather than the tying together of two stems of grass to make a cross that had been previously done. Tomorrow I am interviewing some members of the Muslim community here to see how best we can mark Muslim graves and respect their religious wishes. Neither of these things will have any bearing on the sanitation of the process, they won’t prevent anyone getting a disease or the water sources becoming contaminated, but they still feel important to me. And I guess that’s what we should all keep in mind in Public Health. It isn’t just about the science of it, the vectors and the parasites and the environment in which disease spreads. We also have to respect the humanity involved in each intervention, because in the end it’s equally as relevant.

If you would like to learn more about the humanitarian effort in South Sudan, or make a donation, you may like to visit the websites of the following organisations:

Nadia is studying the  MSc Public Health by distance learning. She is originally from the UK but lives in South Sudan as an aid worker.

This entry was posted on Monday, October 13th, 2014 at 3:24 pm and is filed under Courses directed by LSHTM, Public Health. You can follow any responses to this entry through the RSS 2.0 feed. You can skip to the end and leave a response. Pinging is currently not allowed.