Readings Before All Readings

It is that time of the year again; the familiar, frenzied yet excited emotions that you felt a year ago. It is like travelling to a foreign country―a time of exploration and discovery; but accompanied by the anxiety of the unknown. You welcome it though. Despite all the tension it had given you for one full year, you did feel buoyed up by a sense of achievement by the end of it.

Now, the new list of texts (again) intimidates you. You slowly realise that the sheer number of them will tower over you. Some of them are heavy, more so on the mind than in the hand. Merriam Webster calls them ‘tomes’― “large or scholarly books”. Surely, you want to be ‘scholarly’, but your packed schedule stands between you and the books. You will, however, be relieved to know that it is not impossible to approach this seemingly herculean task. What I find immensely helpful, when I did my first year, as well as now when I am gearing up for the upcoming academic year, is to first gather the raw materials―things which construct the skeletal frame. It is the first step, which I think is essential before I approach the BA English programme. I have also imagined the tools for this first step as the sculpting knife and the stone; the very basic materials I need before I proceed to chisel a completed sculpture. As an Asian doing the English course, I feel, knowing the history of England― both the country’s as well as its literature, provides the bare necessities to develop better appreciation. Three books, in particular, I have found extremely helpful in providing me with adequate knowledge within the shortest time. 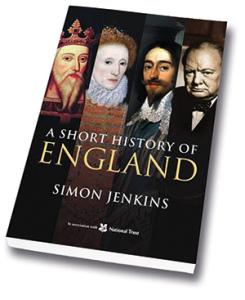 The first is A Short History of England by Simon Jenkins. I chanced upon it in the library. If a title says that it is “a short history” or “a short introduction” to something, I would imagine it to be able to fit into my smallest handbag. However, Jenkins’ “short history” is anything but short: it is hefty, with 384 pages, measuring about 18 cm by 25 cm, and weighs about a kilogram. Its size doesn’t quite qualify for what I have in mind of a book of that title. However, when I read it, I began to see how this book lived up to the standards of its genre.

Its lucid language, several pages of beautiful illustrations, and Jenkins’s lively style make A Short History of England a good read. Dating from the year of the Anglo-Saxon age to post- Thatcher years, this book sheds light on key figures and important events in the history of England. What I find especially useful is the author’s references to some of the principal writers of English literature such as Shakespeare, Thomas Moore, Jonathan Swift, etc. 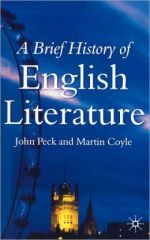 The second book is one which I find myself using very often since I started the course: A Brief History of English Literature by John Peck and Martin Coyle. It is sectioned according to the ages of literature such as Old English Literature, Middle English Literature, Renaissance and Restoration Drama and The Eighteenth Century literature. This book focuses on how literature is either reflections of or challenges to the periods they are written in, by making parallels between history and literature. The authors of this book also make it a point to provide extracts of the play, poem or prose, followed by explanations, to exemplify its significance of that period. This makes it easier for me to understand the relationship between history and literature. Being able to make a connection between them is very useful when I encounter the use of literary devices such as intertexuality, allusion, parody, satire, etc. 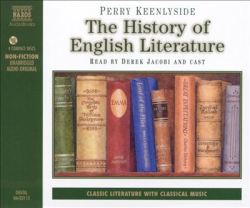 My final recommendation would be an audio book― The History of English Literature by Perry Keenlyside. It is structured in a rather similar way like A Brief History of English Literature, except that it focuses more on the backgrounds of the authors of various periods. Keenlyside gives informative introduction to critical works like Dr. Faustus, Moll Flanders, and Gulliver’s Travels. These nuggets of information could be used as the start-off point for more intensive research.

Year two’s reading list is quite daunting, I confess. In fact, students have to build our own reading list by selecting authors and texts, based on the topics we would want to focus. It, therefore, becomes imperative that we acquire a good grounding in the history of England, history of English Literature and the English authors. For an Asian like me, who may not have an in-depth knowledge of the English history, these books would come in handy.

This entry was posted on Wednesday, August 20th, 2014 at 2:57 pm and is filed under English. You can follow any responses to this entry through the RSS 2.0 feed. You can skip to the end and leave a response. Pinging is currently not allowed.